You can play Major Millions with three reels or with five.  Personally I prefer the five reel slot machine with fifteen pay lines.  The jackpot is the same for both, which is an incredible quarter of a million dollars.  To win the progressive jackpot you will need to collect five Major Millions symbols on the fifteenth pay line.  Players who don't play the 15th line, we end up winning nothing.  The cost of playing all fifteen lines is only $3, which almost everyone should be able to afford. 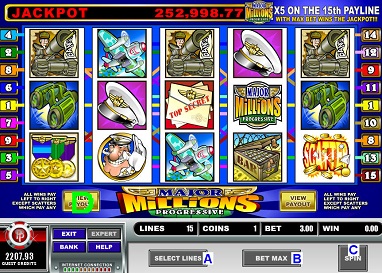 Some of the advantages of the five reel slot is that there is a scatter symbol that pays out a bonus, regardless of which pay line it is on.  The Major Millions symbols is wild and will not only be substituted for any other regular symbol, but it will also triple the normal pay rate for that winning pay line.  There is also fifteen lines to play, which means you are fifteen times more likely to win a prize.  Probably even more so, because this slot machine seems to be set up to reward many small pay outs along with some rather large prizes during a regular playing session.

This slot machine can make you a ton of money on any given day.  The current jackpot is over a quarter of a million and growing fast.  This jackpot is known to grow even higher, but usually it is not too long before some lucky slot player wins it all.  You can only win the progressive jackpot if you are playing with three coins.  Players not playing with three coins will win nothing if the Major millions symbols line up on the bottom pay line.
The pay structure for this game awards large secondary prizes as well and the smaller prizes are smaller than the average, but pay out much more frequently.  The middle pay outs are smaller than average and can be expected to be won during a good playing session.  The jackpot symbol is also wild in this game, making winning pay lines a lot easier to make.  Not only that, but winnings are doubled or even quadrupled if there are two wild symbols on a winning pay line.