This slot machine is nothing short of exciting.  There is free spins, multipliers, a smash bonus feature, an expanding wild symbol that can cover three full reels and a massive grand prize.  You can play this game for free and real money.  The minimum wager is $0.01 on a single line and the maximum wager is $1250 on 25 pay lines. 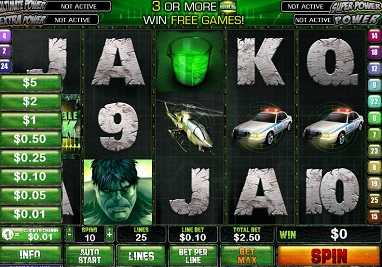 The top pay out is 4000 times the line bet, which can be won by having five radioactive symbols on a pay line.  This may seem incredibly hard, no pun intended, but there is a wild symbol to help you out.  The Incredible Hulk symbol is a special wild symbol that can expand across the reel during special situations.  If the symbol is in the middle on the center reel, it will expand across the center reel and you will rewarded two free re-spins.  If three wild symbols are on the 2nd, 3rd and the 4th reels, then the Incredible Hulk will expand across the three middle reels and you will get one free re-spin.  This will almost guarantee some wins and can cause you to win some big time pay outs.
There is also a scatter symbol, that will reward you a bonus based on your overall wager across all the pay lines and can reward you with free spins.  If you have three or more scatters on the reels, then you will be rewarded ten free spins with a 3 times multiplier.  The smash bonus feature can be triggered by having a smash bonus symbol on reels one and five.  To learn more about this bonus feature, scroll down to the bottom of this review.
Overall, this is probably one of the most exciting slot machines I have personally have ever played.  Like most of the Marvel slot machines there is bonus features, free spins and a ton of excitement.  If you like playing slots, just a little bit, then you should definitely check out the Incredible Hulk slot machine. 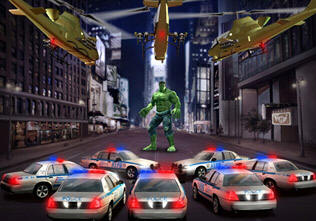 The Incredible Hulk Smash bonus feature will be triggered whenever you get the Smash Bonus symbol on reels one and five.  This feature is triggered during the regular game and can not be triggered during the free spins feature.  Once you have the smash bonus symbol on the two reels, then you will be taken to a different screen to play the bonus feature.  First you will need to select one of the three helicopters, which will reveal a cash prize value.  Next you will select three out of the seven police cars, which will reveal a multiplier.  Once revealed you will have the sum of your multiplier multiplied by the cash value revealed.  A Hulk rage feature is triggered randomly during this bonus game.  If this happens, then the Incredible Hulk will smash all seven police cars, which will earn you a much bigger bonus.